If you are looking for a full-service ATM company in South Florida (the Miami–Fort Lauderdale–West Palm Beach metropolitan area), then you have come to the right place.
This is the page on our website dedicated to ‘The Magic City’, ‘The Venice of America’ and surrounding communities.

ATM placement – If you want to get an ATM machine for your business in Miami you can take advantage of our Free ATM placement program: we place an ATM in your business for free, take care of everything, and pay you for it. This service is for qualified locations only. If you’re business is busy, with a lot of foot traffic, you’ll likely qualify.

ATM Partnership – Similar to the ATM Placement, with our ATM Partnership you can load the ATM and we’ll share more of the ATM surcharge with you. We usually split the surcharge revenue 50/50.

ATM Purchase – If you want to buy an ATM machine in Miami. We offer free ATM shipping anywhere in Florida. One of our ATM technicians in Miami will help you install and program it. You keep 100% of the surcharge.

Mobile ATM – We are one of the few ATM companies in Miami that can offer an ATM machine for a temporary event. If you have a concert, festival, or other large public event we can place one of our wireless ATMs at your event. We typically don’t do events with less than 2000 people and usually only those who agree to hire us as the provider for their event next year.

ATM Cash Loading – We can refill the ATM cash for ATMs in Miami or anywhere in Florida. We have access to virtually unlimited vault cash so you can be sure your ATM will never run out. We have private ATM cash loaders or an armored car option for high-volume locations. 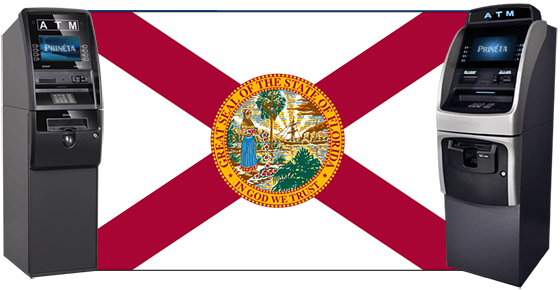 We service the following areas:

We have an office in the center of Miami’s commerce district on SW 8th Street.

If you are interested in getting an ATM, please contact us through the form below and tell us about your location and what you need.

We can have one of our local ATM technicians come visit your location in person and talk with you about our ATM services.